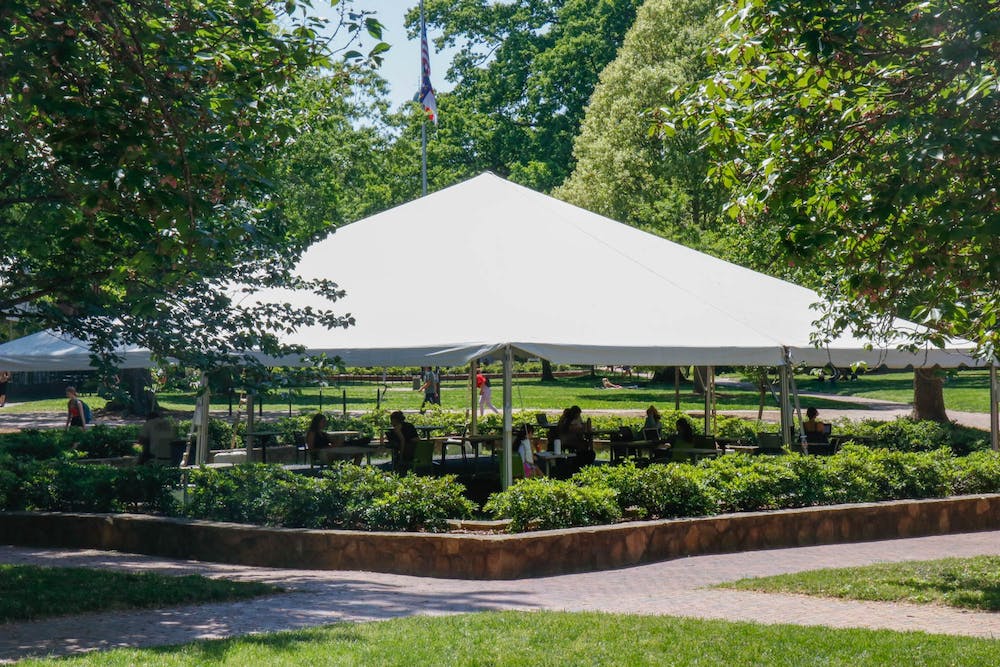 The quad is the heart of the University of North Carolina, but the pandemic forced a tent-shaped steak through it.

The tent came at a time when it was much needed. Coronavirus was peaking, classes were predominantly virtual, indoor study spaces were sparse. For a long time it was a saving grace, but those days are long gone.

At least it did, until the winter snow caused its roof to cave. Students came to peace with the infamous tent’s brutal end; we were all ready to let go. The university however, was not.

As quickly as it came down, the tent was back in its glorious form, but at this point students had already moved on. That’s where the petition comes in.

An anonymous student created a Change.org page dedicated to ridding the quad of its parasite once and for all. Nothing came of the petition, the tent remains, along with students’ hatred towards it

“It’s not a heavily utilized thing in my opinion,” he said. “It takes away from the beauty of The Quad, and it’s just like a huge obstruction that literally less than 1% of the student population uses.”

Sophomore Rachel Fang agrees with Aiken, but proposed a reasonable alternative, if the tent was to be taken down.

“I would like to see it gone, but I think it should be replaced with outdoor picnic benches or some kind of seating …,” she said. “Anything but that massive tent.”

The difficult part of making drastic changes to campus such as this one, is that there will always be someone who disagrees. Sophomore Abby Royle describes herself as neutral when it comes to the tent.

“I don’t really notice it,” she said. “I wouldn’t say I rely on it, but when I need to do work outside, I do it. Yeah, I agree with Rachel, I want to see something that you can sit and work with, but I don’t think that I have too strong of an opinion on it.”

Kyle Junkin, who is a Junior, is the opposite of neutral. To him, the tent might be one of the worst things to ever happen to UNC-CH.

“I hate the tents, I hate everything about them.” he said. “Can’t stand the tents, they’re ugly.”

The tent is located in the middle of the quad, so when looking down at Wilson Library from the Old Well, all there is to see is the back of the tent.

“I just want to be able to look at a completely unobstructed view of Wilson, but there’s a massive, hideous tent just erected there,” Junkin said. “I am in full favor of this petition; it has my full support. We need to get rid of this monstrosity.”

Junkin does raise a reasonable argument however, that the tent may sometimes be the only seating option. Lenoir Dining Hall, which is only a few steps away from the tent, is most frequently full.

Libraries do not allow for any eating indoors, which only leaves the tent.

“Yeah I have used the tent, once or twice,” he said. “If I ever go to the bottom of Lenoir, and it’s a beautiful day outside, the tent is kind of the natural place to go. It’s not like I enjoy it, but the tent just happens to have extra tables.”